My third project is about the eating disorders bulimia and anorexia. I believe eating disorders like these aren't as talked about as obesity. People believe it's the person's choice to stop eating. Once they start an eating disorder, it becomes addicting. It's shamed upon, but the shame can be too harsh and the victim can go into the hiding, which makes the eating disorder harder to diagnose.
I changed my idea of a med drama. Instead i created a script about a girl, Beverly, who is "inspired" by thinspiration. Thinspiration is found on any social media or website. It encourages girls to lose weight, mostly in unhealthy ways. For example, not eating and just drinking water, or none. The sites or pages are filled with pictures of skinny girls.  She starts to avoid eating in anyway she can, which is one of  the symptoms of anorexia. Her friends find out about her non-eating habits and is pressured to each. The end of the script ends suddenly. I chose to end it suddenly because once you have an eating disorder, you can't stop it and everything gets better in a snap of a finger.
History

My history piece  is annotations of my script. Each note I make is information I gathered from my research. The notes explain why each character did a certain thing. 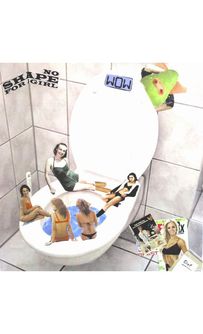 I created a collage for bulimia. The background is set on a toilet. The most popular method of getting rid of food is forced vomiting into a toilet. Models in bikinis surround the seat. Based on my research, models become bulimic to maintain weight or lose it. The right corner of the picture has magazines. Images of skinny women on covers of famous magazines "inspire" girls in bad ways. A pear with pig ears pokes out behind the toilet lid. The pear is from an ad "This is No Shape for a Girl" you can also see those words in the upper left corner. Girls who have an eating disorder compare themselves to pigs.