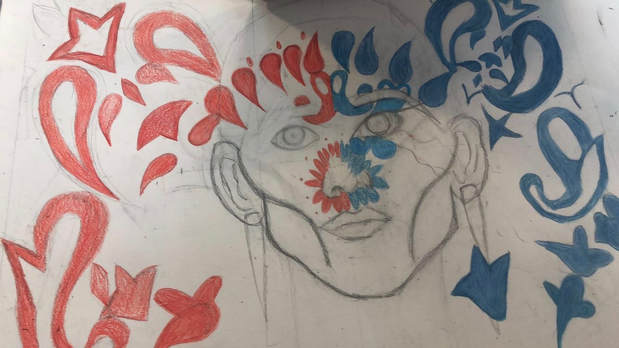 With the theme being honor, for my first project I decided to lead in the direction of the 90s rap and drug culture. The most idolized stars of this time period were a heavily influenced to "lower class-men" as themselves were extremely influenced by drug culture, and it was a crystal clear problem. Romanticizing gangs and drugs was at its height in this period, if you were not involved in some form of affiliation of some belief, you were the prey. Drugs ruined the streets of cities, tore families apart into pieces and created a unaware numbness to the world. Despite this being a over-glorified generation, not only did the 90s shape the future, but rap, gang and drug culture forever. Just think of gangs and old school rap, and the 90s come to mind.

For my art aspect of my project, I decided to design a graphite drawing of someone heavily affected by drugs. I attempted my best to make the illusion of consistent drug use easily to become aware of, as I hollowed his cheekbones down and gave his facial structure a entirely different look apart from those who don't abuse drugs. The picture I referenced was a man who pretty much sold his life for cocaine, he looked very ill and completely unaware. As I finished up my drawing over a two week span, I also decided to not leave the background plain and dull as the addicts face would stay in black and white. But, instead I drew the symbols on the typical gang bandanas, and colored the left side red to represent bloods, and the opposing side blue to represent crips. I decided to draw this man because how influential people are to substance abuse, and how unaware many are to the trouble that comes with having a crazed addiction. I added some research into this art piece by diving into the topic of hard core drug struggles and how they not only affect your mental health, but physical as well. I studied the traits of those involved with the substance cocaine and how it disfigured their form, and referenced that for my drawing.

​
As for my english and historic aspects of my project, I decided to write a few poems from the perspective of one of the hottest stars of the 90s, Tupac Shakur. Within the poems I explained the hip-hop culture through his eyes, using inspiration through his own poems, songs, upbringing and beliefs. The poems are written through his eyes, as he was such a influencable voice  over gangsters, common people, drug dealers and others within the city bounds, I felt it would portray the culture much more if seen through the eyes of a idol during this time period. The historic aspect ties within the english portion as I fused more historic words into the poem instead of keeping it simple and bland. For the history aspect I included I created annotations to explain the meanings of the words I chose, and why I chose these specific words since they all have a role to play within this time period. The english portion comes within the set up of my poem, using correct grammar, poetry set up, and contextualization.

Additionally, for the English portion of my project I researched about the hiphop stars upbringing for not only him, but his sister and mother as well in regard to the living situation. His mother Afeni Shakur made so many sacrifices to keep her children safe and at ease; risking her life to selling drugs too support her family financially. From having to stay off the grid to hide his mother's husband from the police in New York City to moving out to California with his sister all in a span of a few years. I chose to research this individual person for the idea of contextualization because he was a very vibrant, different person to study and understand, as he was highly intelligent as well. Tupac understood the gangsters, common people, hiphop stars and drug dealers so well, we wrote songs about the problems within the world, and thats one of the main reasons why I chose him.  I wrote the poem from his perspective as a young boy, his struggles very apparent through the literary devices I used, which made the reader dive into a world where the constant worry was their next meal. Writing a poem from the perspective of Tupac was very challenging since I had to research his upbringing to understand why he was the way he was, as well as his beliefs to understand the decisions he made and why he made them. The poem goes into detail on how his struggles shaped him, how he has many regrets yet still holds himself together thought it all.

More details about the historic aspect of my project were my research and how my topic was involved and fits into the 90s as a whole culture. The idea of a culture ran and known widely for the rabid drug use and gang violence fits in perfectly within the 90s scene as this is exactly what the decade was consisted of.  The poem written from the perspective of Tupac, a 90s hiphop icon, was to show how drugs and gangs had a toll on everyone - not just the common people, and those in the city. After writing the poem I made sure to include cited annotations for the words I wisely chosen to describe the time much better, as I even went into description about what the gangs actually symbolized, how they were formed and what they stood for. Another main part of my poem I annotated was the Black Panther alliance, and how and why they were formed along with their beliefs. Within my poem there are many other time-related words or phrases used to describe the tragedy of the era, how everyone was surrounded and overpopulated with drug culture, and how it was influences the minds of the youth. My project process was to read in depth about Tupac's life, understand the struggles he went through to have a bit of a clearer mindset to understand how he related to other common families with the same issues growing up. After reading and watching several articles and movies about Tupac Shakurs life, I moved on to begin researching on the gang troubles at the time and who was mainly involved. I gathered main areas targeted by the influence of gangs and used that to pin-point the street slang and words I would incorporate into m y poem to give it a more "90s vibe."


​
DEAR MAMA.
Grown from nothing but the slums,
I was raised by the streets and boys with guns.
No, we weren’t like the other kids,
much poorer but with the equal amount of sins.
Living a life of her own, Black Panther,
She was a conquering soul, a fire burning away inside,

nothing could ever extinguish the flames that dwelled in her chest.

burning everything to ashes in her path.

Her veins were deep and crimson, fuiled with gasoline and adoration, for her children, more than her lust for dope.
Always creating miracles out of street corners
and clear plastic bags sealed with white lady,
if there was a must,
there was a way for mama to make it happen.
Every Thanksgiving there was always a dish on our table,
Despite the danger for herself in the path of making it happen,
I think the reason she did it was she thrived off of our smiles
And silence of growling stomachs and empty complaints.
She created ease with her two hands and narcotics, for us.
Her determination gave us waves of hope that crashed around
our bodies when everything around was dark and wilting,
sweeping us under a limitless trance of security.


Crack Fien; Black Queen
she was ignorantly being blamed for our naive mistakes.
Stealing purses for starving stomaches;
selling rocks for hopeless dreams.
Nothing ever fulfilled the constant desire to pay the rent on time,
Truly, I’m sorry mama.


Sometimes it feels as if I’ve been stuck in the dark my entire life.
So much, sometimes the stars don’t even seem so bright.
Gave and stole; some even say I sold my soul for this life;
Killuminati, never had a grasp on me.


East coast to West coast; Red versus Blue
No matter the location, things will forever remain the same.
Gangs will gang bang and junkies will smoke dope.
Crips and bloods; gangs and guns  -
all human in the world, not one superior to another.
All belong to a clique, wether a gang or religious affiliation,
Everyone is a slave to some idolized fragment of what they believe.
Skin deep, red found in the rouge of cheeks;
Blue dwelling in cold hands and veins -
We all are a victim of rivalry.


I treat my songs like art and use my beats as a canvas.
Nobody understands I got her how I am.